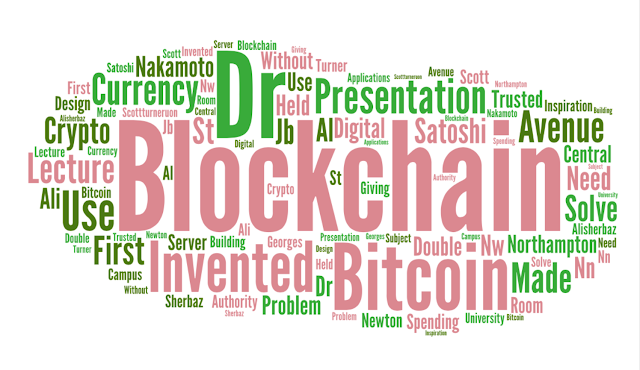 This evening I attended an interesting lecture on Blockchain at the University of Northampton, presented by Drs Ali Al-Sherbaz and Scott Turner. It covered the basics of blockchain, include hashing, mining, signing, creating blocks, and so on.

It then covered particular examples of blockchain projects within the University, including one on social interactions and one on network activity logging. Apparently Blockchain is one of the key topics the University will be addressing in its future development strategy.

What wasn’t covered, however, was Bitcoin and in general most comments were dismissive of cryptocurrency. I think that will prove to be shortsighted. Most of the criticisms and limitations levelled at Bitcoin and other cryptocurrencies during the event were demonstrably false or at least incomplete and a more detailed discussion would have demonstrated that.

Personally I think cryptocurrencies are here to stay, with Bitcoin taking the role of the reserve cryptocurrency, and their positions will get stronger and stronger over time. Whether they will eventually replace fiat currencies is less clear, but I certainly wouldn’t dismiss the possibility.

For sure they will massively disrupt the banking and financial sectors (see, for example, Bank Of America: Our ‘Inability To Adapt’ Could See A Failure To Compete With Crypto).