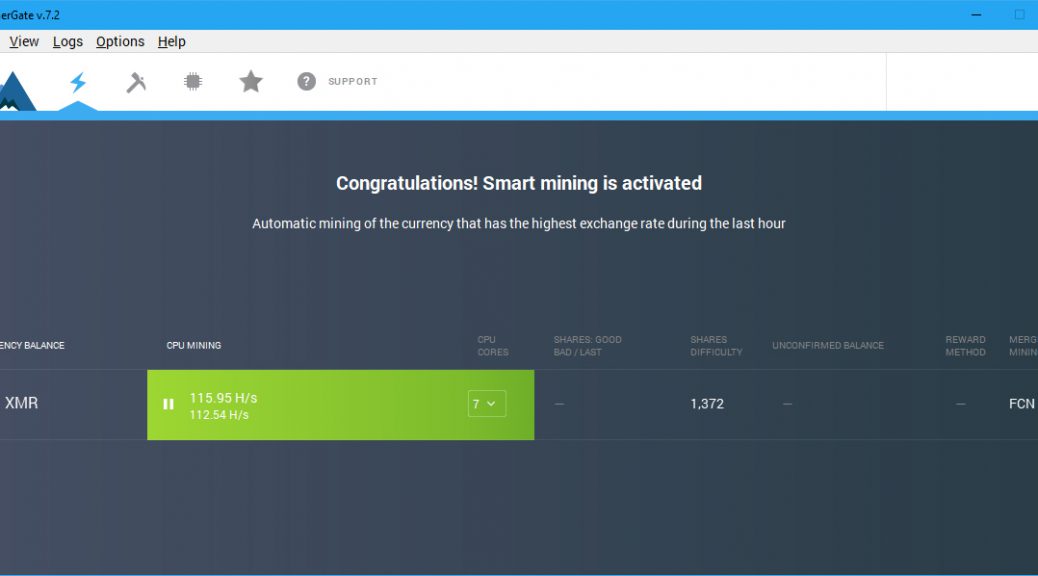 After my initial rather disappointing first foray into mining cryptocurrency (specifically the Bitcore coin using my PC’s graphics card) I didn’t pursue the idea further. It hadn’t been a great surprise as my graphics card was old and looking rather underpowered compared to the latest GPUs.

However, last week I heard about someone profitably CPU mining the Aeon coin and I decided to take another look. I followed the same process, starting by downloading the Minergate software.

I installed it (despite lots of warnings, presumably false alarms, about viruses), created an account and kicked it off. You need to create an account on the MinerGate.com website, and you then link to this from the MinerGate app.

The process began with running a benchmark. The result of this was a score for my PC of 927 – four stars! That sounded encouraging. However it then said “You can make an extra 50 USD per year with only this computer” which rather brought things down to earth.

Anyway, after running it overnight the results were that I made a few tens of pence in Monero/XMR in parallel with FantomCoin/FCN (the software chooses what it believes is the most profitable coins for you) but spent about 50p in electricity. So overall it was not profitable.

My conclusion therefore is not just that my old PC isn’t any good for GPU mining of cryptocurrency, it’s no use for CPU mining either!

My cunning plan now is to use a new, powerful gaming PC for mining that I ordered recently. Watch this space to see how I get on.