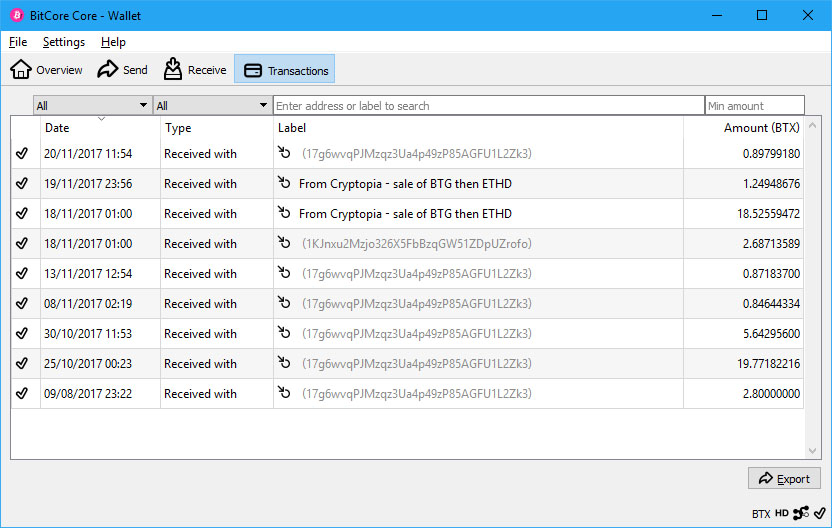 November has been a lively month in cryptocurrency, but particularly for the Bitcore coin (symbol BTX). I’ve written a number of blog posts about it, but I think a summary would be worthwhile:

1. One month ago, on 22 October, I had just 2.8 Bitcore, courtesy of a free airdrop from last April. Each Bitcore was worth about $6 so the total value was about £13.

4. While the one-off airdrop was nice I was actually after the weekly 3% airdrops and the first one came in on 8 November. At this point I reached 29 BTX at about $10 each so worth £227.

6. On 18 November I received my Bitcoin Gold airdrop. Since Bitcore was doing so well I used the money to buy some more. Bitcore had another airdrop of their own so my end result was 51 BTX, now at an impressive $30, so worth £1100!

7. The next day I sold a small Ethereum Dark airdrop for 1.25 more BTX.

8. This Monday the next weekly airdrop came in giving me another 0.9 BT

The end result for the month – not counting at least another weekly airdrop to come in before the end of this month – is that I now have 53.3 BTX. Today their value has dropped back a little to $27 each, so their total value still hovers around £1100.

So, through a whole series of free airdrops, plus a big rise in the market, my outlay of £100 is now worth £1100. Just one reason why I love cryptocurrency!

To an extent it feels like I’ve earned the money, by ‘jumping through hoops’ to claim the free airdrops. Therefore the outcome is the most satisfying, despite the fact that over the same month, by doing nothing, each of my Bitcoins (BTC) has gone up in value from £4100 to £6200, so my 12.5 BTC have gone up by an astonishing £26,000 in a month. Somehow that seems less real than the BTX gains.