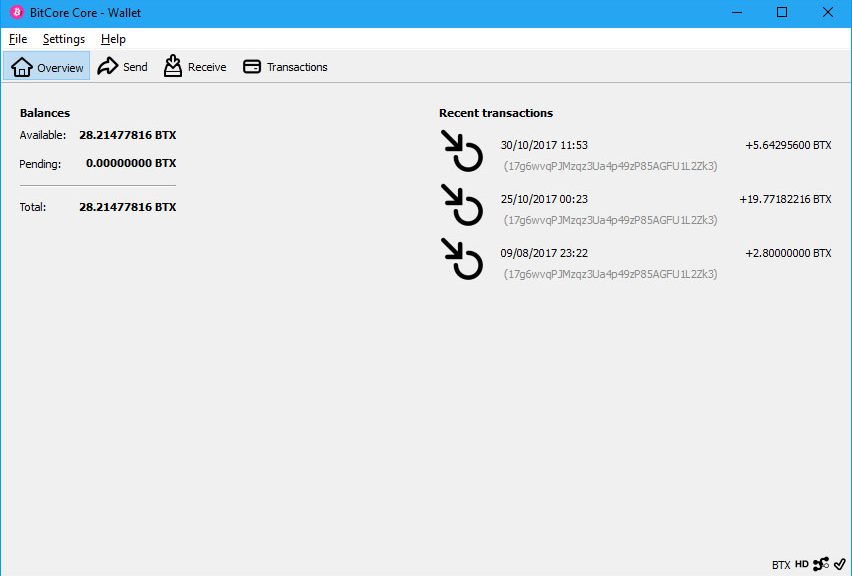 I have been following Bitcore (symbol: BTX) for some months. It seems to be one of the more interesting new altcoins as it seems to have momentum. It has regular airdrops and community discussions which is more than most here-today-gone-tomorrow altcoins.

I first heard about it because it had an airdrop that allowed you to claim free Bitcore if you had Bitcoin in a private wallet on a specific date (26 April 2017). On that day I had 2.8 Bitcoin in my Ledger so I decided to claim. I assume this airdrop is still open so if you had some Bitcoin then you can still claim yourself.

The process is pretty straightforward – download and install a Bitcore Wallet from the Bitcore website as per the usual process (much like I detailed in How to Make a Bitcoin Wallet). You then need to sign a message using your Bitcoin Wallet to prove you own the Bitcoins, and then you register for the airdrop by providing the Receive address for your Bitcore Wallet, plus the message, on the Bitcore Airdrop page.

For me an additional complication was that my old Ledger Nano can’t sign messages so I had to import the account into Electrum and sign it there. I therefore didn’t make the claim until August.

From that original airdrop I received 2.8 BTX. They have held their value fairly constant at about $6 so that was worth $17 or about £13. Not as great as some airdrops (e.g. eBTC) but not bad.

I missed a trick, though, as Bitcore provides free airdrops weekly worth 3% of your current balance. That certainly beats the 1% per year you might get with a conventional fiat savings account! However, you only get the airdrop with a minimum balance of 10 BTX which, of course, I didn’t have.

Anyway, when I heard of proposed changes in BTX airdrops from 30 October I decided to do something about it. The airdrops would only be available to those who registered, but would start with a free 25% airdrop which seemed rather attractive. Therefore last week I bought £100 worth of BTX (so 19.77 BTX) – that brought my total to 22.6 which was more than enough.

I have covered the process of buying and transferring the BTX previously.

My reasoning was that £100 was enough to be worth doing – since I would get about £25 free for the effort of registering – and that I didn’t have the nerve to do what I maybe should have done. Which was buy £10000 worth of BTX and make £2500 overnight. Of course, the latter would have left me open to big losses if BTX devalued quickly.

Anyway, I’m pleased to report the free 25% BTX (5.64 BTX so worth about £30) has arrived in my wallet. And the price has remained relatively stable so I should really have bought much more…

I plan to keep hold of my BTX for some time (whereas I usually sell airdrops fast) because of the weekly airdrops I should now get. Of course, Bitcore know that’s what people will do and I credit them with coming up with a very clever way of keeping their currency stable and with significant value.