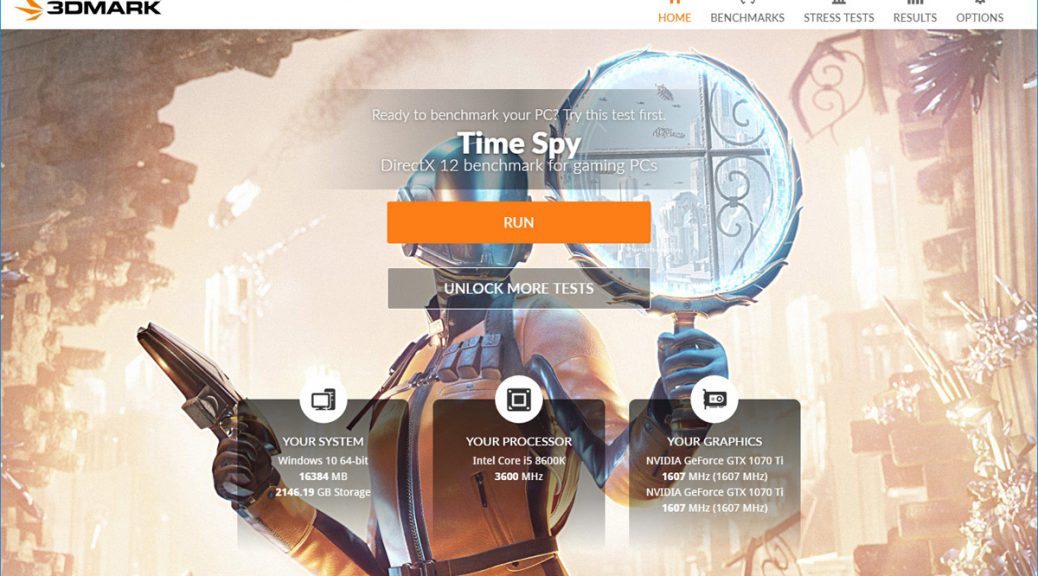 Once my mining PC (‘The Beast’) had arrived it unfortunately sat around for a while as I was busy on other things (particularly getting my tax return done). Once more time became available the first thing I did was to check out The Beast’s performance.

Having paid out for a high end system I was hoping for great things. I ran two particular suites of tests: 3D Mark  and PassMark.

The 3D Mark software is used for evaluating specific 3D graphics card performance – the most crucial element in cryptocurrency mining.

3D Mark works primarily by running the latest version of the Time Spy benchmark at high resolution and with a range of graphical features enabled to determine how well the graphic card(s) can keep up. The benchmark is impressive to watch run with highly complex and challenging scenes running through at an impressive speed.

I’m pleased to say the Beast showed itself off well, with an overall 3D Mark score of 11,589.

Comparing this to all the PCs logged against 3D Mark shows The Beast’s score to be better than 97% of all results.

The PerformanceTest9 benchmark by PassMark, in contrast, is for bench-marking general PC performance, including CPU, disk and memory speed – although it does also include some graphical tests.

Again The Beast acquitted itself well with 5/5 scores for CPU, 3D Graphics, Memory and Disk (though only 4.5/5 for 2D Graphics).

It achieved an overall score of 6736:

And individual results putting it in the 99th Percentile, against other PCs testing with the same benchmark, for CPU, 3D Graphics, Memory and Disk (though only 90th Percentile for 2D Graphics):

Overall I was very pleased with the core performance of The Beast, particularly its raw 3D performance which is the key to cryptocurrency mining.

Next I tried it out mining to see if it would live up to the potential it clearly showed on paper – results are here: Experiments in Crypto Mining 8: Initial Performance.

2 thoughts on “Experiments in Crypto Mining 7: Testing The Beast”