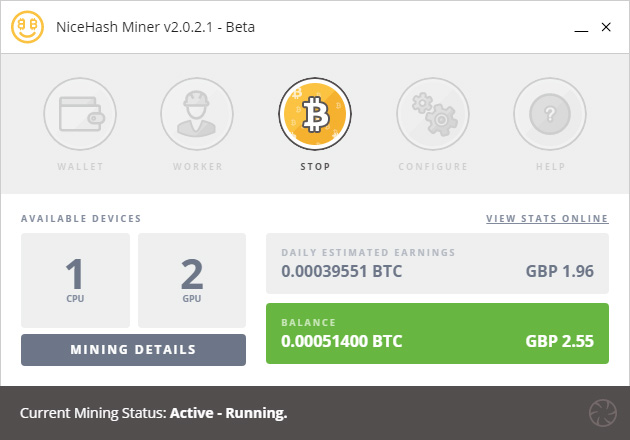 Following my initial attempts at mining I had decided to stick with NiceHash on my old PC as a good compromise between mining performance and convenience. Therefore it was natural to move straight to mining with NiceHash on The Beast.

Initial results have been largely encouraging – as might be expected given its impressive performance. Certainly it can mine profitably: as I write this it has Daily Estimated Earnings of about 0.0004 BTC, currently worth about £2 per day.

I have a screenshot from back in February showing a slightly greater Bitcoin earning rate of 0.00048 BTC:

But because of the volatile nature of Bitcoin value we can see that only two months ago that was worth nearly £3.50 per day. Because of this volatility I try not to focus too much on the fiat earnings but instead on the Bitcoin earnings, since I think long term that’s what matters.

I use a Kill-a-watt style meter to see how much electricity the PC is using – and currently it’s 400W. Though that’s not all spent on mining, since the PC gets used for other things (like this blog) it’s a good enough approximation. So in the worst case, over 24 hours this PC will use 24 x 0.4 = 9.6 kWh. At about 15p per kWh that would cost £1.44 – so definitely I’m into profit.

In fact it’s much better than that:

So in practice I’m definitely paying less than half the maximum, and probably less than 50p per day.

That’s the good news. The bad news is that there are downsides beyond just the cost of electricity. Specifically The Beast runs hot – I’m monitoring it with MSI Afterburner and in less than an hour after starting mining the graphics cards hit their default maximum temperature of 83° C.

The results of this are:

The upshot of this is that I’ve bought an extra fan to go into the PC case low down where the graphics cards are. Currently the case has most of its air flow going along the top where the CPU is, but that’s hardly used during mining. I think this is a case where Scan made a mistake in the system design, despite me making it clear the PC was intended for cryptocurrency mining.

I’ll install the new fan as soon as I can and then report back on the results.

One thought on “Experiments in Crypto Mining 8: Initial Performance”