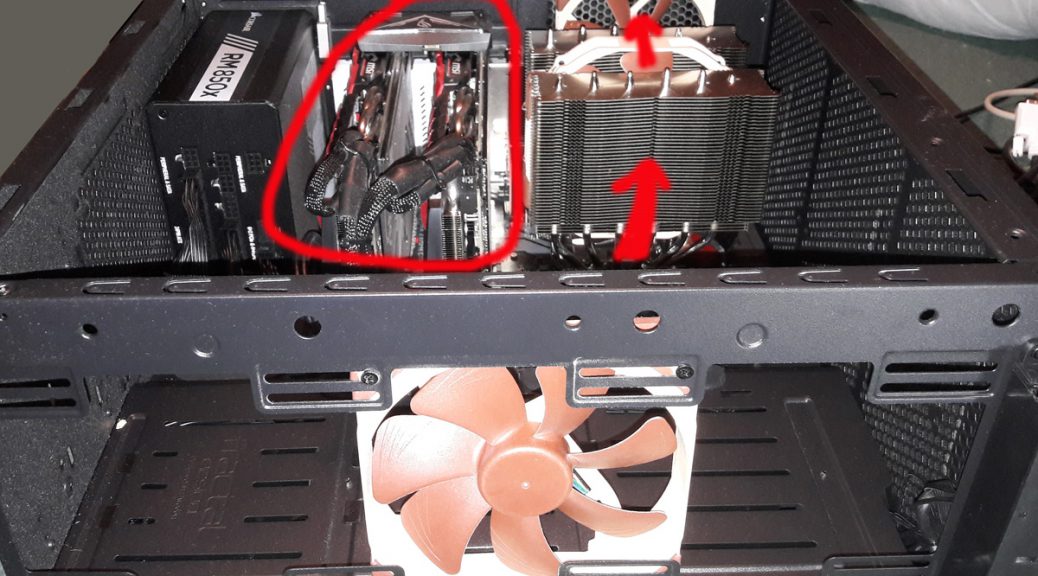 Although my mining PC, The Beast, is capable of mining cryptocurrency profitably I was concerned about the amount of heat it produced, and consequently how noisy it was (because of the graphics card fans running hard). My conclusion was that it was not set up well for running the graphics cards continuously because most of the cooling airflow bypassed the cards.

That can be seen in this photo where I have tried to illustrate the airflow route – it comes in the front of the case via the fan in the middle, then gets pulled through the CPU heatsink via the CPU fan then exits out the far corner through the outlet fan. This makes sense for a PC where the CPU is running hard. It’s pretty useless for crypto mining where the graphics cards – whose positions are ringed in red – are doing all the work and generating all the heat.

The main change I have implemented therefore is to install a second inlet fan, nearly opposite the graphics cards, powered from the same connector as the current fan (so they match speeds). I have also removed two expansion card blanking plates between the graphics cards so there is more space for the hot air to exit after it has passed the graphics cards.

This is the ‘after’ picture:

The result is that the graphics cards are running cooler most of the time, and significantly cooler if I manually increase the speed of the inlet fans. The main issue now is that they are set to automatically react to the CPU temperature, which of course stays relatively low, rather than directly to the GPU temperature. My next step in cooling will therefore be to look into slaving the fan speed to the GPU temp.

That is not a standard feature on almost any motherboard or fan utility, but is apparently something that can be done by a third party utility called SpeedFan. But that’s for another day – for now I’m happy to keep mining with the system as it is with the extra fan.